As StockBoardAsset.com notes, this rare signal often preludes the potential for civil conflict.

In the past 10-years, the early warning has been issued in Burundi, Iraq, Ivory Coast, Kyrgyzstan and Nigeria.

The United Nations Committee on the Eliminations of Racial Discrimination has called on high-level politicians and public officials of the United States to condemn “racist hate speech and crimes in Charlottesville and through the country”.

We are alarmed by the racist demonstrations, with overtly racist slogans, chants and salutes by white nationalists, neo-Nazis, and the Ku Klux Klan, promoting white supremacy and inciting racial discrimination and hatred

As per UN News Centre:

In a decision issued under its ‘early warning and urgent action’ procedure, the Committee, which monitors implementation of the International Convention on the Elimination of All Forms of Racial Discrimination, stated “there should be no place in the world for racist white supremacist ideas or any similar ideologies that reject the core human rights principles of human dignity and equality.”

In addition to the criminal investigation of the individual who ploughed his car into a crowd of peaceful protestors killing a woman, the UN experts asked the US authorities to undertake concrete measures “to address the root causes of the proliferation of such racist manifestations.”

Let’s take a moment to gain another perspective from Los Angeles Times writer Jesse Walker asks in an Op-Ed: Are we headed for a second civil war?

Not inconceivable? That’s a low bar. It’s certainly possible to imagine America returning to the violence of the 1960s and ’70s, and beneath the overwrought language, that’s what some – though not all – of these civil war prophets seem to have in mind. But a near-future war with two clear sides and Gettysburg-sized casualty counts is about as likely as a war with the moon.

These “new civil war” stories frequently take a bait-and-switch approach. They invoke the violence at demonstrations like the rally in Charlottesville, Va., last weekend, where a man reportedly sympathetic to Nazism drove his car into a crowd of counter-protesters, killing a woman. In the same breath, they discuss the broad divisions separating “red” America from “blue” America. If you flip quickly between small violent clashes and big political disagreements, those big disagreements will look bloodier.

It’s clear that the United States is being purposely divided. The United Nations is clearly playing into the hype of issuing an early warning that has only been issued for third world countries in the past 10-years. In our opinion, the continued division in America will only be achieved through more events such as Charlottesville that will polarize the sheep into the streets for slaughtering.

CERD also called on the Government to ensure that the rights to freedom of expression, association and peaceful assembly are not exercised with the aim of destroying or denying the rights and freedoms of others, and also asked it to provide the necessary guarantees so that such rights are not misused to promote racist hate speech and racist crimes.

In other words – speech should be free… as long as it does not hurt my feelings. 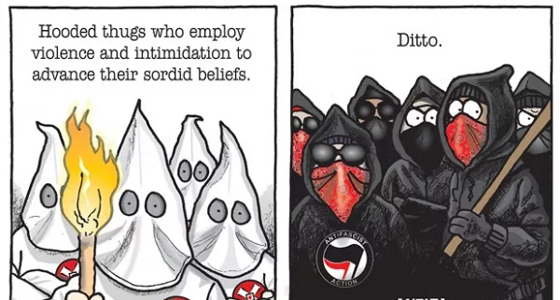